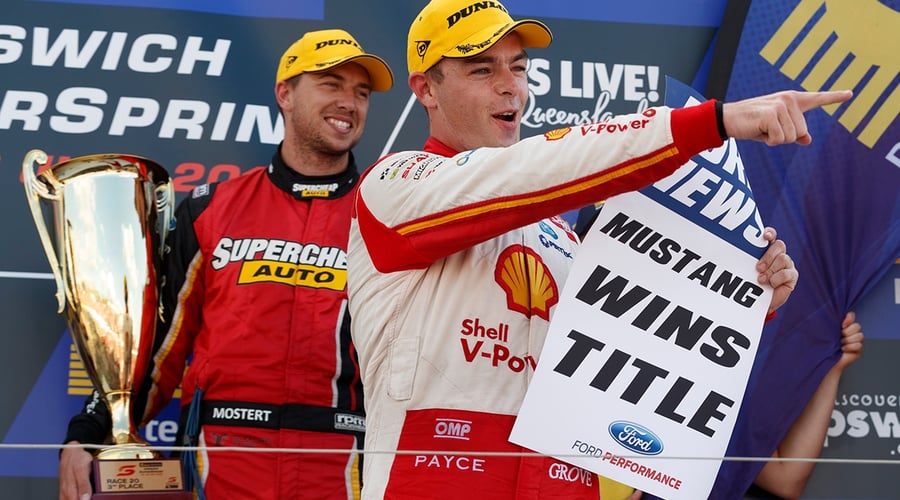 The Ford Performance Mustang Supercar has won Race 20 of the 2019 Virgin Australia Supercars Championship to give Ford an unassailable lead in the the Manufacturers’ Title. The win at the Century Batteries Ipswich SuperSprint came from series leader Scott McLaughlin, who drove his Shell V-Power Mustang Supercar from pole position to set a lap record and secure the title for Ford.

The Supercars Manufacturers’ Title is based on the number of victories in a championship season. With six Mustangs in the 2019 field, the #17 Mustang fittingly sealed the title by posting Mustang’s 17th race victory. Twelve races remain.

Winning Mustang drivers in the 2019 Virgin Australia Supercars Championship include Tickford Racing’s Chaz Mostert, who won at the Melbourne 400 in the #55 Supercheap Auto Tickford Mustang, as well as Shell V-Power’s Fabian Coulthard, who was first home at Symmons Plains, Tasmania, and at the following Phillip Island round.

Coulthard is also in the record books for having secured the Mustang Supercar’s first ever Armor All Pole Position, achieved at the season-opening Superloop Adelaide 500, while Pole Positions throughout 2019 have been posted by Coulthard’s Shell V-Power teammate McLaughlin, as well as Mostert and Cameron Waters, who drives the #6 Monster Energy Tickford Racing Mustang.

“We cannot thank the teams for their day-in, day-out hard work and dedication in bringing Ford the Supercars Manufacturers’ Title,” said Ford Australia and New Zealand President and CEO, Kay Hart. “We’re so proud of the partnership we’ve built between Ford, Ford Performance, Shell V-Power Racing and Tickford Racing, and we know how fortunate we are to have such talented and determined people behind Mustang. There are many people behind this result who have all worked tirelessly to contribute to a fantastic group effort.”

The Ford Performance Mustang Supercar was homologated for the 2019 season, and is the first two-door model to compete in Supercars since the series inception in 1993. Ford Performance competes at the highest level in racing categories including IMSA, the World Endurance Championship and World Rally Championship, with Supercars presenting another challenge and the opportunity to collaborate with some of the category’s best and brightest through the partnership with such accomplished teams.

“We're honoured to have clinched the Supercars’ Champion Manufacturers’ Title for 2019 in our first year with the new Ford Mustang,” said Ford Performance Global Director, Motorsports, Mark Rushbrook, who was on hand when Mustang made its race debut in Adelaide in February.

“We are grateful to have clinched it, but we certainly could not have been in this position without all the assistance of our great teams Shell V-Power Racing and Tickford Racing,” Rushbook said. “They were key to helping us bring the new Mustang to the series, and their preparation and race craft during these race weekends has been outstanding. We could not be prouder to have such great partners, and we are thrilled for the Ford fans of Supercars who have been behind us all the way.”